It’s a bit of a marathon for me this week, have to handle a couple of miter saws by a local retailer. Of course, I’m always happy to put a high-end power tool through its paces – particularly when I don’t have to pay for it! I was loaned the DEWALT DW713 Compound Miter saw alongside another saw from the collection and got to work on a couple of woodworking project courtesy of my better half. 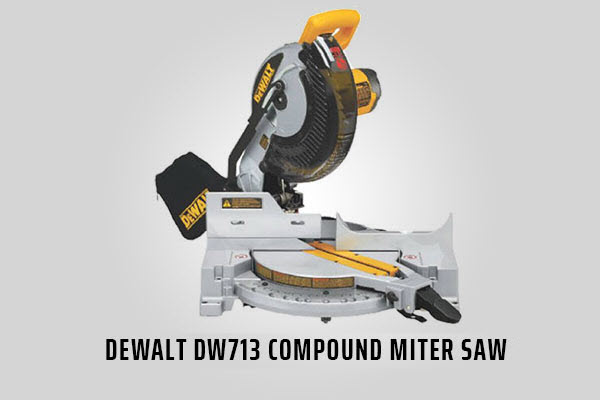 Once again, I found it difficult to say anything particularly negative about the DEWALT DW713 Miter saw. This saw is an exceptionally powerful 15-amp machine that’s capable of delivering a whopping 5,000 RPM. And you can trust me when I say that the additional 1,000 RPM makes a difference you can feel with every single cut.

In terms of power, performance, durability, and general versatility, this saw is an all-round powerhouse for heavy-duty applications. It might be a little on the expensive side for DIYers but still represents great value for money as a pro miter saw. Go through the DEWALT DW713 review to know more about this amazing product in detail.

One of several high-power saws this DW713 coming in at around the $500 mark, you’d expect nothing than market-leading power and performance for your money. In terms of basic specifications, the size and weight of this saw are as follows.

If you’re anything like me, the first thing that will have stood out about the above is its weight. Incredibly, the mighty saws weigh in at a super slender 35lbs. As far as I’m concerned, you’d hard-pressed to find a lighter saw that packs this kind of power and performance. Additional features and selling-points, as highlighted by this miter saw, include the following factors such as:

Outperforming many comparable miter saws, the DEWALT DW713 packs a powerful 15-amp motor and is suitable for a top no-load speed of 5,000 RPM. As you’d expect, this is more than enough to make light work of even the toughest materials and the most demanding jobs.

As already mentioned, this compound miter saw is surprisingly lightweight for a saw of this caliber. Weighing just 35lbs and with a convenient carry handle, it really couldn’t easier to transport between jobs. Its compact size also makes for easy transportation and storage.

Compatible with the DEWALT Laser

This DEWALT DW713 10 inch Portable Compound Miter Saw is also compatible with the model DW7187 adjustable miter saw laser, further enhancing its accuracy and ease of use. The laser is available as an optional extra, and it isn’t included in the kit.

Along with a 90-day money-back guarantee for total peace of mind, this portable miter saw ships with an extended three-year warranty from the manufacturer. All of which adds up to great value for money.

My Experience with DEWALT DW713 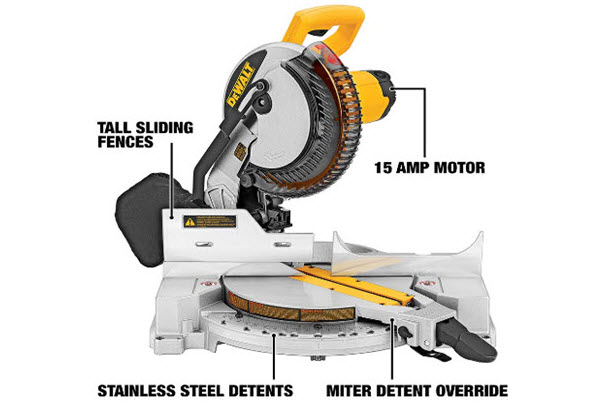 If you cut corners on quality, you end up with the same issues. Wobbly blades, uneven fences, inconsistent cuts, and reduced output power when dealing with difficult materials – you know the score. However, step up to something like the Dewalt DW713 10 Inch Compound Miter Saw, and you immediately know where the extra money goes.

This is far from a cheap saw for occasional DIY use. Right out of the box, this lightweight miter saw is ready to produce flawlessly straight and consistent cuts with every hardwood imaginable.

The only slight issue was the tendency of the saw to move around a little on my worktop when using the clamp, which could be due to its impressive lightweight characteristics. I personally would have expected that the laser would have included for this kind of price, but it’s not as if you actually need it. However, this was easily remedied by a bunch of rubber feet I already had lying about the place.

The DEWALT DW713 Compound Miter saw isn’t cheap, but what you get for your money is something superb. It’s one of the most powerful and capable miter saws in its class, which is also built to go the distance. 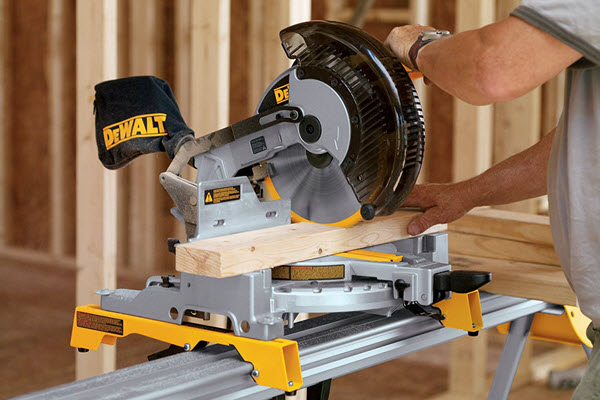 I’d say that for pros and keen DIYers, this thing is well worth considering. With this miter saw, it’s the classic case of ‘buy right, buy once.’ Sure, it’s expensive, but it’s also the only saw you’ll need for the foreseeable future.