Have you noticed that many people use “Chop Saw” and “Miter saws” interchangeably? If you’re new to the world of tools, this may not seem odd. But you must understand the differences between the two. That’s why we have a detailed Chop saw vs. Miter saw comparison. 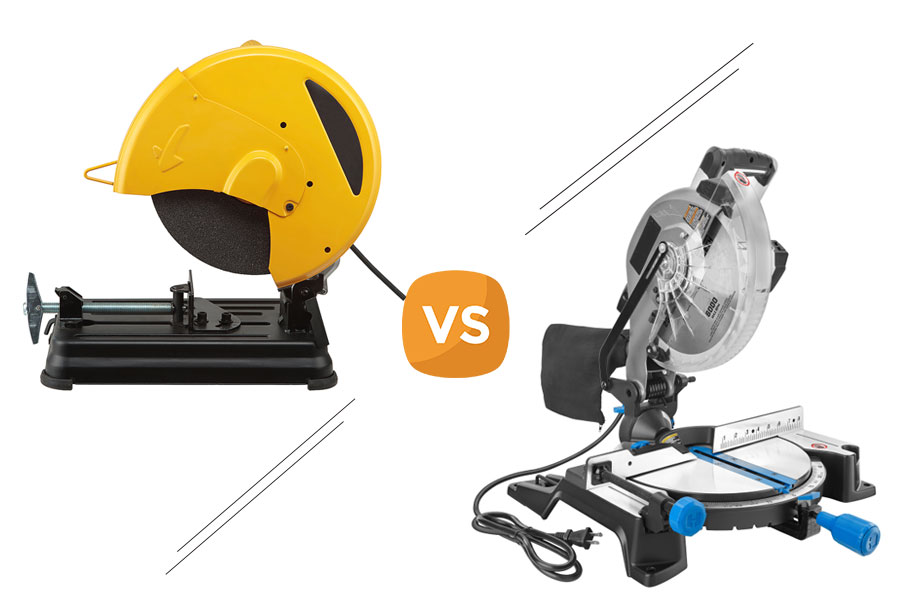 Both chop saws and miter saws are similar in their cutting actions. But they are different types of tools. While chop saws make straight cuts only at 90 degrees, miter saws can make angled cuts. Adjusting a chop saw to work like a miter saw may not yield great results.

So how do the two devices differ from each other? Which tools should DIYers and professionals consider? We’re here to settle the miter saw vs. chop saw argument – once and for all! So keep reading and find out about the two power tools!

What is a Chop Saw?

A chop saw, also called an abrasive saw, is a circular saw used to make straight cuts on tough materials like metals, concrete, tiles, etc. It uses an abrasive disk, usually made of fiberglass. They typically come with metal guards to provide protection against sparks. 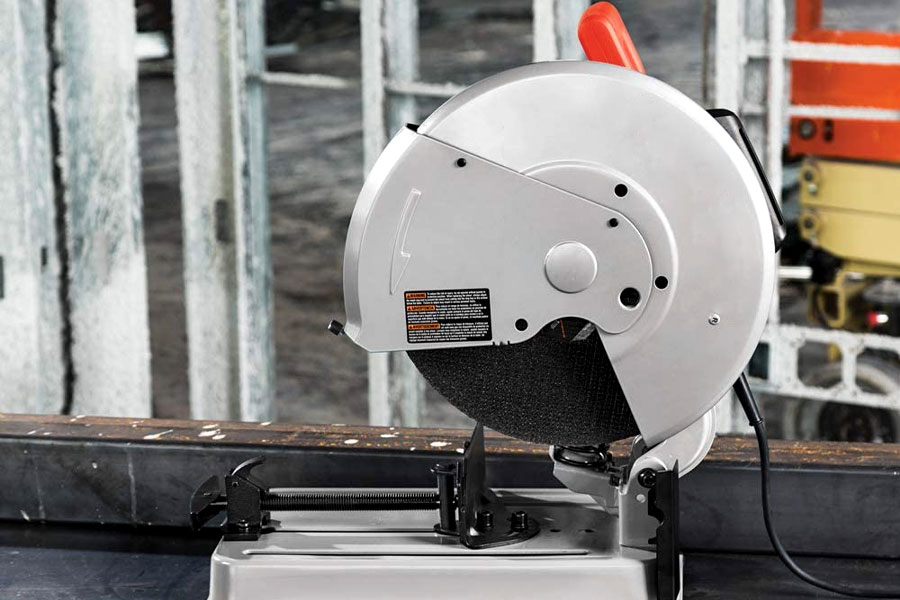 A chop saw is a powerful and quick tool rarely used for angled cuts. But it may not be impossible to cut angles with this tool by adjusting the base. Its best performances are seen in cutting thick materials at 90 degrees. Precision cuts are not its strong suit.

What is a Miter Saw?

A miter saw is similar to a circular saw that uses a toothed disk. It can make angled cuts on thinner materials like wood. You can move the base to rotate or tilt the blade. This helps you achieve miter cuts. Advanced miter saws can make bevel cuts when you adjust the handle.

The type of cut you can make with a miter saw depends on the configuration of the saw. Miter saws are great at making cuts of 0-45 degrees. High-end hybrid miter saws have sliding handles that allow more convenience, especially when you have to cut wide workpieces.

It’s essential to have a clear idea about the working mechanisms of both chop saws and miter saws so that you can understand their differences more clearly. Let’s take a quick look at how the blades move in each saw for different uses.

Chop saws use abrasive circular cutting wheels. This type of blade is like a grinding wheel instead of a regular toothed blade that other saws use. Chop saws have different configurations, and they can have free-hand, walk-behind, and table-top models. 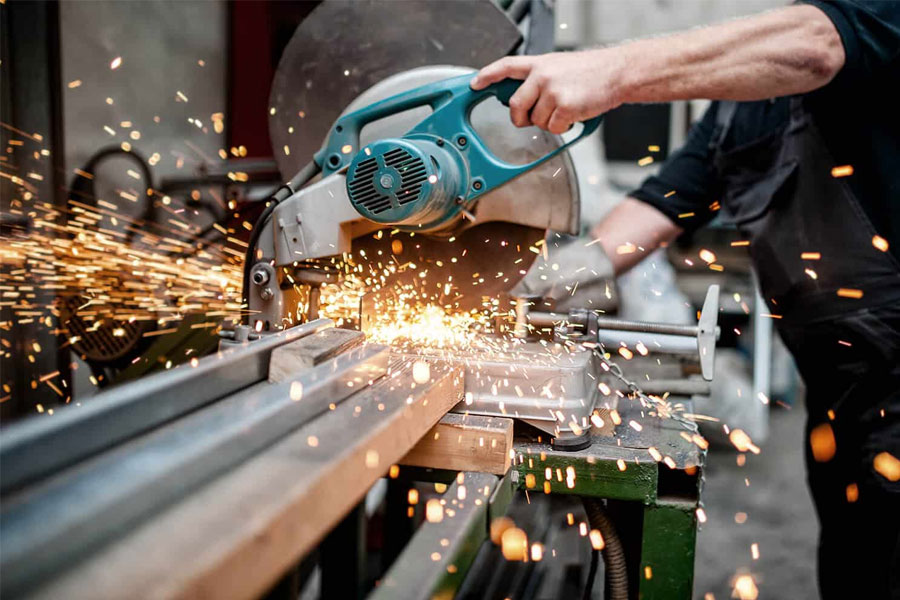 The composite friction of the disk blades cut through hard and thick materials. It is a cross-cutting saw that works with the blade positioned perpendicular to the fence. This allows it to provide an up-and-down chopping motion for straight cuts on workpieces. 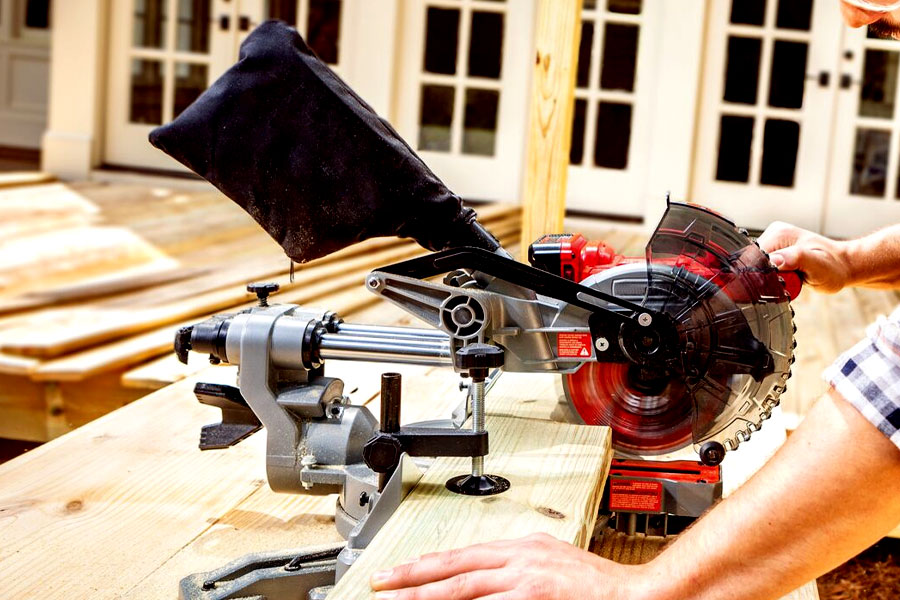 Miter saws are great for making cross-cuts at 90 degrees. Their primary use, however, is making angled cuts of 0-45 degrees. These can cut the workpiece vertically or horizontally by adjusting the position and tilt of the blade to give you miter or bevel cuts.

Where they are Used?

The two saws may look similar, but their uses are quite different. Their power and cutting angles differ, which is why their applications are varied, too. Let’s take a quick look at the uses of chop saws and miter saws individually.

A chop saw is a tool known for its incredible power. It also comes with the ability to make cross-cuts at 90 degrees. Thus, it is used for cutting metals, concrete, asphalt, and other thick materials. Due to its cutting abilities, it is common in industrial projects. 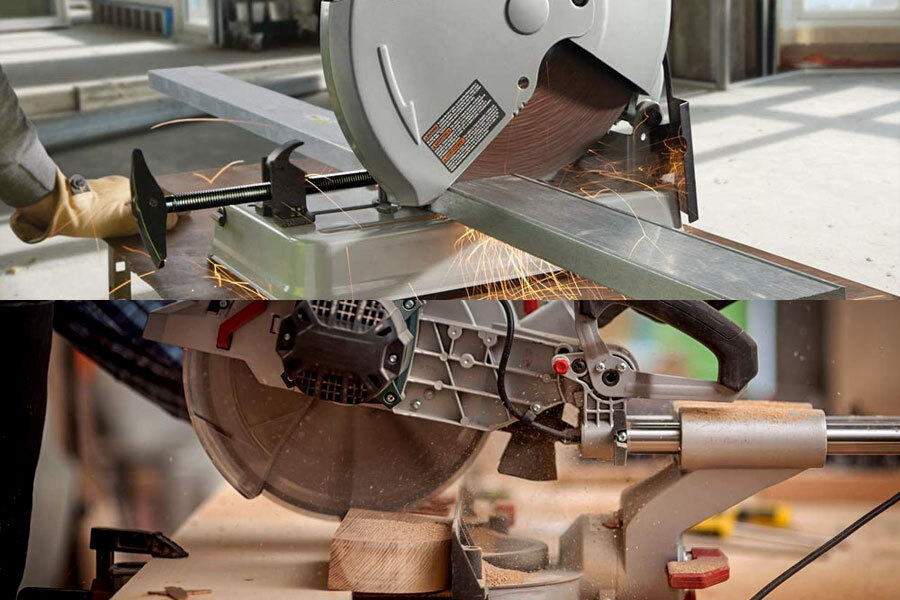 A miter saw is used to provide angled cuts. Its primary use is making miter cuts, though some are used for bevel cuts, too. That, and the tool’s lower power level, makes it perfect for cutting wood and thinner materials. It’s ideal for carpenters and DIYers.

By now, you must have acquired an idea about the two saws. Now let’s take a comparative look at the different aspects that make chop saws differ from miter saws. Let’s take a look: 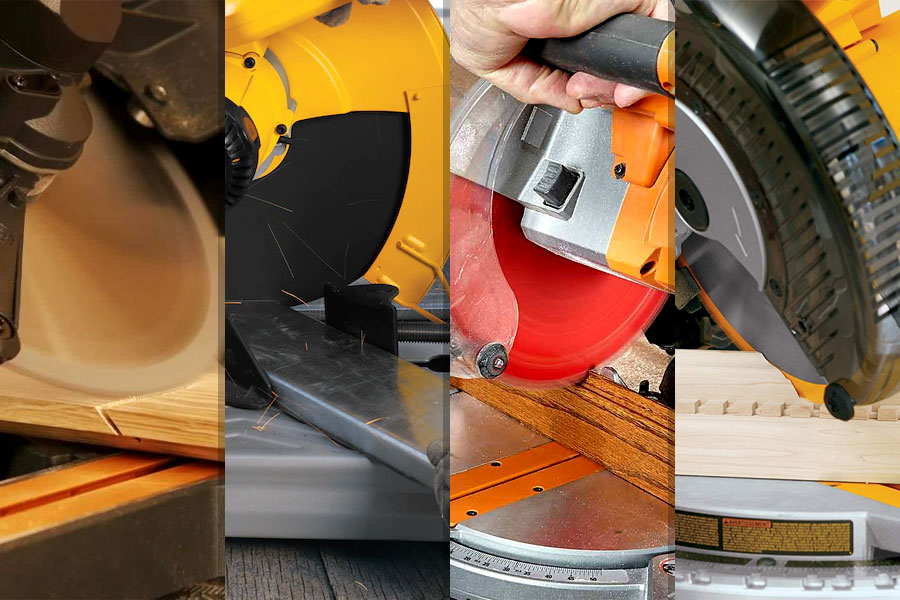 A chop saw allows 90-degree cross-cutting, i.e., straight cuts. While you can adjust the base to cut angles, it’s not efficient. But a miter saw is designed to make 90-degree cuts, as well as angled cuts, primarily – miter cuts. It may also make a bevel cut or a compound cut.

Due to the high power level of the device and the straight cut they make at 90 degrees, chop saws can handle hard metals, including iron. However, miter saws can make angled cuts, though they have lower power. So, they can cut wood and thin metals like aluminum. 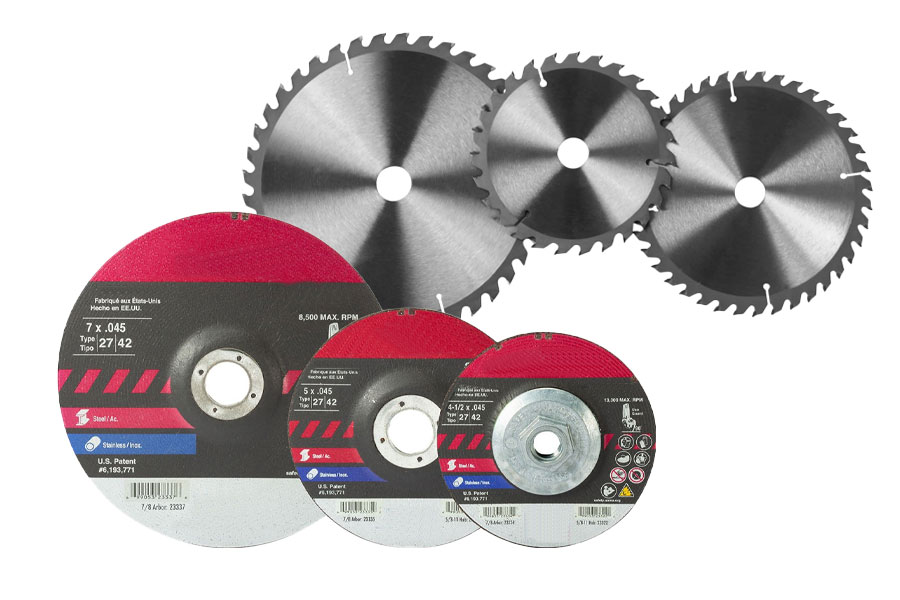 A chop saw uses an abrasive wheel – and it is usually 14 inches in size. These blades are prone to depreciation. However, miter saws use carbide-tipped blades that last a long time. The blade sizes may vary from 8 to 12 inches, making them manageable.

Chop saws are powerful and produce sparks. They are also larger. So they are not too safe for new users. On the other hand, miter saws are usually equipped with multiple safety features, including a blade guard to cover it all the time. So it’s much more secure in comparison.

Both saws with similar features belong to close price brackets, though chop saws may cost slightly less. However, chop saws are less cost-effective in the long run because you may need to purchase blades frequently – which doesn’t happen with miter saws.

Pros and Cons of Chop Saw

Pros and Cons of Miter Saw

Chop Saw vs. Miter Saw – Which Suits You?

You must have understood by now that chop saws, and miter saws are quite different from each other. Professionals and DIYers use them for various applications. Don’t let the miter saw vs. chop saw comparison confuse you. Consider your cutting needs and materials instead. 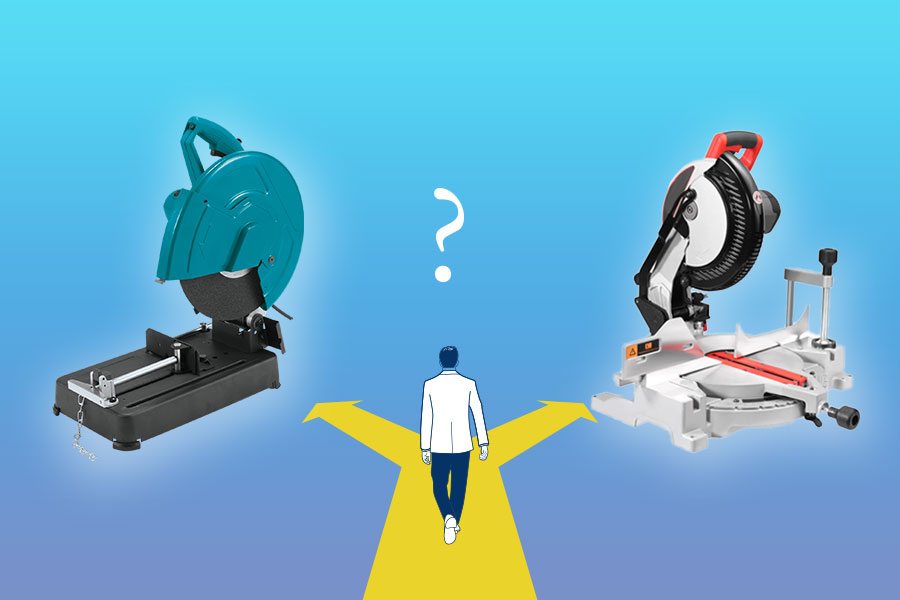 You may have a construction job at hand requiring you to cut tiles or even concrete. Or it may involve the use of hard metals. In these cases, you need a chop saw. Though you can make 90-degree cuts only, it can handle workpieces made of tough materials.

If your DIY project involves more woodcutting and handling light metals, choose a miter saw. It is also an excellent tool for carpenters for making furniture, frames, etc., as well as lighter metal types. These tools are helpful in making angled cuts easily for joints.

A chop saw uses abrasive disks that may wear – and you may need to change it from time to time. On the other hand, a miter saw has a rotating blade with teeth coated with carbide. Hence, its blade is durable and can serve you for a prolonged period without requiring a replacement.

If you want the best chop saw, check certain factors like the blade size, motor power, and motor speed of the device. On the other hand, if you’re eyeing the best miter saw, make sure to find a versatile variant that is capable of performing both bevel and miter cuts.

Things you must consider to settle the chop saw vs. miter saw dilemma are cutting materials and cut types. A miter saw handles angled cuts when working with wood or light metals. A chop saw is helpful for cutting hard materials at 90 degrees.

Another aspect you must consider is the level of expertise required for your project. Miter saws are easier to handle and are great for hobbyists. But chop saws are larger and harder to use – and are great for professional construction jobs. So take your pick wisely.

Can You Use a Chop Saw as a Miter Saw?

Chop saws and miter saws are not the same, though they look similar. Chop saws use cold-cut or abrasive blades to make straight cuts at 90-degree angles. A miter saw is a larger tool that uses toothed blades to make angled cuts at high speed and with incredible precision.

What is a Chop Saw Good for?

Chop saws are used by professionals for making straight cuts with great precision and speed. Woodworkers often use the tool for precise square cuts. They can only cut at 90 degrees – which is essentially a straight line. If a chop saw makes angled cuts, it’s a miter saw.

Can You Cut Angles with a Chop Saw?

Chop saws are used for making cross cuts. They can cut a workpiece at 90 degrees. These are fairly simple tools that are rarely used for cutting angles. While the base can be adjusted to try making angled cuts with a chop saw – the results won’t be quite efficient.

Is a Miter Saw Good for Beginners?

A miter saw is an excellent tool for cutting different materials. It can cut cross cuts and miter cuts. Some of them can also make bevel cuts and even compound cuts. They are equipped for precision and speed – and are excellent for beginners, though they need some practice.

Can a Miter Saw Cut Metal?

A miter saw’s power level doesn’t let it cut tough metals like iron. With the right blades, it can make angled cuts. Therefore, it is ideal for lighter metals like aluminum and steel. It is also great at handling wood. Make sure to use a blade that can match your saw’s speed.